Who Reported Solyndra to the FBI?

RUSH: Richard in Fort Myers, Florida. Hi. Great to have you on the EIB Network.

CALLER: How are you, Rush? I appreciate you taking my phone call.

RUSH: You bet. By the way, Netflix is not lowering the price, they’re just apologizing, they’re not changing the price structure.

CALLER: I am a Netflix customer. Might not be in the future, but…

RUSH: That’s a pretty steep price increase if you didn’t know it was coming.

CALLER: I know. Well, I appreciate everything you do, I can tell you that. If it wasn’t for you and a lot of other talk show people we wouldn’t have any idea what’s going on.

RUSH: Well, I appreciate that, sir, I really do. 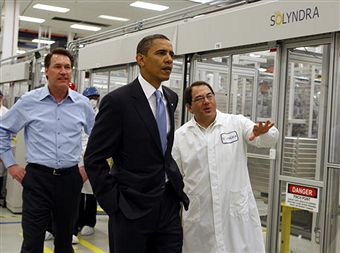 CALLER: My biggest concern is I don’t hear anyone asking the question, who sent the FBI to Solyndra?

CALLER: Yeah. Did the president call the attorney general and say, “Get in there”? How did that work out?

RUSH: That’s a very logical question to have.

CALLER: And where did all the records and computers go?

RUSH: They went to the government.

CALLER: I know. And now, of course, all the heads of Solyndra, of course, it’s now a criminal matter and they don’t have to testify, gonna take the Fifth. I doubt very seriously we’ll ever find out.

RUSH: Well, they indicated earlier that they were going to participate, that they would answer questions. Then it was this week that they informed everybody through their law firms that bundle campaign donations for Obama that they’re gonna plead the Fifth.

CALLER: — the government has their records.

RUSH: Well, no they could still testify. I mean, the government has the records, they could check it if they wanted to.

CALLER: By sending the FBI there they obviously got the impression that there’s a criminal investigation that they might be involved in so they of course, you know, been advised by —

RUSH: It’s very, very logical to connect some dots here. Who could blame anybody for thinking, “Okay, give these guys $523 million,” and it’s gone and the company’s bankrupt and it was never a thriving business, it was never even a real business. Obama made it a centerpiece of the future of this country, green jobs, this is the future, this is how it’s gonna happen. Now it’s belly up, and a day or two after they file for bankruptcy, there’s the FBI carting everything out of the company and out of the homes of the CEO and the CFO. Now, it’s very logical to say, “Who ordered the FBI in there, and for what?” Is the government going to make the case that these guys misled and lied to Obama? Or is there stuff in the records here that if it’s turned up and made public looks bad for Obama? I’m sure that’s what you’re thinking about out there. That this is a raid to hide evidence, not produce it and uncover it. Anyway, I appreciate the call.